Cookies help us deliver our services. By using our services, you agree to our use of cookies.

In Australia, the plant genus Acacia includes about 1000 species of shrubs and trees <http://www.worldwidewattle.com/>. 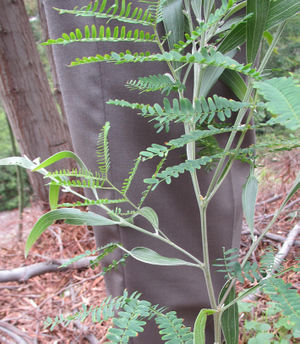 In most of these, the leaf-like foliage of mature plants is actually modified leaf petioles, termed phyllodes, and the normal bipinnate leaves are progressively lost. Thus, among phyllodinous Acacia species, bi-pinnate foliage occurs only on very young plants.

Phyllodes are highly diverse in form, varying among Australian Acacia species from small and spine-like to large and leaf-like. Phyllode-bearing species are classified into three major Sections of the genus Acacia: Phyllodineae with almost 400 species, Juliflorae with about 255 species, and Plurinerves with about 215 species (Maslin, 2001).

More than 250 thrips species in the Thysanoptera subfamily Phlaeothripinae are now known from the phyllodinous Acacia species of Australia. These apparently all feed on green tissues, but they are restricted largely to the two Sections Juliflorae and Plurinerves. These thrips species, also the genera to which they are assigned, are not known from any other plants, and this is considered to represent a unique host-plant restricted lineage reflecting a single invasion of the genus Acacia (Morris et al. 2002; Crespi et al. 2004). 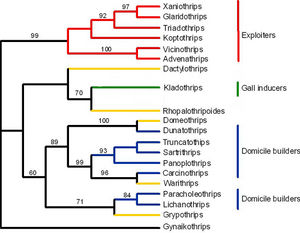 Generic relationships of Australian Acacia Phlaeothripinae based on two genes

Four suites of species are recognised among these Acacia Phlaeothripinae of Australia, each exhibiting very different behaviours.

1. The gall-inducers comprise more than 25 species of the single genus Kladothrips. These induce galls on phyllodes of particular Acacia species, usually with a high degree of host specificity. However, a few species of Acacia support more than one species of Kladothrips, sometimes concurrently. 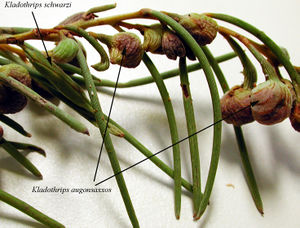 Galls of two Kladothrips species on one branch of Acacia grasbyi

2. The domicile builders are species of at least seven genera that create their own domiciles (or nests) by fixing two or more pairs of phyllodes together with a secretion from the anus, or even by weaving a tent-like structure from this secretion.

3. The exploiters are species comprising six further genera that behave as kleptoparasites, usurping either a thrips gall or a domicile on Acacia phyllodes.

4. About 50% of the Phlaeothripinae species found on Acacia in Australia represent a diverse suite of opportunistic species that invade and breed in any available space that some other insect has created but abandoned on an Acacia.

Despite their behavioural diversity, all of these Acacia Phlaeothripinae species are phytophagous – the kleptoparasites are not predators. Radiation among the four suites of species appears to have been driven primarily by competition for small enclosed spaces that provide protection from sunlight and dehydration in the extremely arid environment of Australia. Moreover, arid Australia is notable for the abundance of ant and spider species, although the significance of these predators in driving thrips diversity remains unexplored.

The thrips that induce galls on Acacia species in Australia are Phlaeothripinae of the genus Kladothrips. This genus now includes at least 25 species, and no Kladothrips species is known to breed on plants of any other genus. 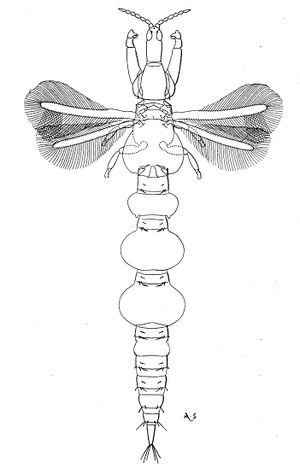 In at least seven Kladothrips species the first generation produced by a winged gall-foundress is small, and adults from her first few eggs develop as wingless adults that have been termed 'soldiers' (Kranz et al., 2001). Amongst these species, Kladothrips intermedius is particularly interesting because some of the soldiers have long wings although their flight muscles are deteriorated or absent (Chaulk et al. 2013). 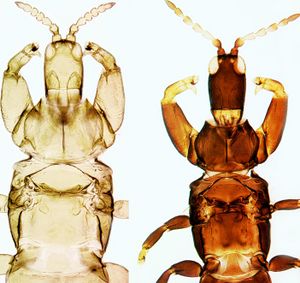 These soldiers defend the gall from invasion, particularly by phytophagous kleptoparasites of the genus Koptothrips. Moreover, the soldier morph of Kladothrips intermedius produces a strong antifungal compound that can control the fungus Cordyceps bassiana, a potential pathogen of gall thrips within these enclosed spaces (Turnbull et al 2012). Defensive behaviour and breeding capacity vary among the Kladothrips species that produce a wingless morph, and defence and breeding are negatively correlated (Perry et al., 2004). The second generation within galls of species that produce such a wingless morph is of fully winged adults that disperse and induce further galls.

In contrast to the species that produce a wingless morph and that are invaded by Koptothrips species, there are several species of Kladothrips in which the gall-foundress becomes physogastric and produces rapidly a single generation of as many as 1000 individuals (eg. Kladothrips rugosus).

Differences in breeding strategy among Kladothrips species are generally related to the longevity of the galls. Among species that produce a large population rapidly and do not have soldiers the galls develop quickly and are short-lived. In contrast, the galls of species with soldiers develop more slowly and last longer. Galls vary in size and shape, from rolled phyllodes, to simple pouches, and multilocular pouches.

An adult induces a gall by feeding on one surface of a phyllode. Cell multiplication results in a pouch developing, into which the thrips is sealed, although the lips of such a gall can re-open depending on turgor pressure in the phyllode cells.

Galling thrips induce growth changes in their host plant. In contrast, domicile creation on Australian Acacia species involves an adult thrips manipulating pre-existing phyllodes. The domiciles are produced by glueing or sewing together two or more phyllodes to produce a small space within which to breed and feed (Crespi et al., 2004). In some of these domicile creating thrips the fore legs are greatly enlarged, particularly in species of Carcinothrips. Some species, such as Lichanothrips pulchra, produce droplets of a glue-like product from their anus to fix two flattened phyllodes together face to face. This leads to discolouration of the part of the phyllode on which the adults and larvae feed. In species of Sartrithrips the glue is more diffuse around the margins of the enclosure, rather than deposited in discrete droplets. Other species, such as Dunatothrips aneurae, use a silk-like product to hold together two or more narrow or needle-like phyllodes. In contrast, Dunatothrips skene adults weave the silk they produce into a flattened tent on the surface of a phyllode, and breed within that tent. Whereas gall induction on Acacia species in Australia is the result of feeding by a single female thrips, domicile creation sometimes involves collaboration between two or more adults – a behaviour known as pleometrosis (Morris et al., 2002; Gilbert & Simpson, 2013). Dunatothrips vestitor can produce extensive colonies in which two or more individual colonies become merged within a communal, interconnecting space defined by many silken threads.

Kleptoparasitic thrips in galls or domiciles

The kleptoparasitic thrips that invade the domiciles produced on Acacia in Australia represent at least three different genera, Xaniothrips, Crespithrips and Schwarzithrips. Adults in the first of these genera use an array of stout setae on their abdomen to drive out the original domicile creating thrips by thrashing their abdomen laterally and walking backwards (Mound & Morris, 1999). Adults of the other two genera are presumed to use a spade-like tubercle near the base of their antennae to effect entry into the domiciles that they usurp. In contrast to the kleptoparasites, a few thrips species have evolved as social parasites or inquilines within Acacia thrips domiciles, and this behaviour possibly arose within a single clade (Gilbert et al., 2012). Colonies of Dunatothrips vestitor sometimes include small numbers of Advenathrips inquilinus without any obvious disturbance to the colony (Morris et al., 2000). However, profuse breeding by Akainothrips francisi within colonies of Dunatothrips aneurae is associated with depression in the rate of reproduction of its host (Gilbert et al., 2012). Males of A. francisi vary greatly is body size, shape and colour within a single colony, but no evidence of male competition has yet been demonstrated.

At least 50% of the Phlaeothripinae species on Acacia appear to be opportunistic in their behaviour, invading abandoned galls or abandoned domiciles of other thrips, or the abandoned mines or enclosures created by larvae of moths and weevils. This behaviour occurs in species of more than a dozen genera, and these species are remarkably diverse in their structure. Species of Grypothrips usually form colonies in abandoned Lepidoptera leaf-mines and leaf-ties, and females of some species in this genus, such as G. cambagei, are remarkably variable in size and structure, although the significance of this remains unexplained (Crespi et al., 2004). 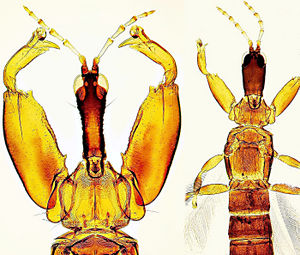 The genera Akainothrips, Dactylothrips and Katothrips each include more than 30 species, with further undescribed species known. Several smaller genera including Brakothrips and Rhopalothripoides are also known to include further undescribed species. Some of these opportunistic species have developed methods of defence, both physical and chemical, presumably in response to the predatory activities of the many ant species that are always present on Acacia plants. The tube-like abdominal segment ten that is so typical of Phlaeothripidae is greatly modified among the females (but not the males) of species of Dactylothrips, as is the structure of some other posterior abdominal segments.

Females of many species in the genus Katothrips also have abdominal segment ten modified in various ways. One species, Katothrips flindersi, living within the abandoned mine of a weevil species in a relatively thick phyllode, was found to produce a powerful repellent from its anus when experimentally provoked (Crespi et al., 2004).

Some Phlaeothripinae species on Australian Acacia species are commonly found in splits on the bark of young twigs, but it remains unclear where they feed and breed. As has been observed in some domicile-living species, it is possible that they feed on the plant surface but retreat to the cracks in bark for shelter from the sun. Most of these thrips species are very small and difficult to observe in the field (Mound & Moritz, 2000).

Australian Acacia thrips provide outstanding opportunities to study several basic biological principles. These include the evolution of social behaviour (including eusociality), based on the diversity of soldier-like morphs among Kladothrips species (Fry et al 2011), and the pleiometrosis exhibited by Dunatothrips species (Gilbert & Simpson 2013); the evolution of host plant preferences, based on Kladothrips species that are morphologically indistinguishable but with genetically different populations on particular Acacia species (McLeish et al 2011); the exploitation of haplodiploidy to adaptively manipulate sex ratios (Kranz et al 2000); the evolution of chemical and behavioural defences, including the abdominal diversity among Dactylothrips and Katothrips species (Crespi et al 2004); and the genetic and nutritional factors determining the grotesque differences in body size and structure among females of Grypothrips species.